One very cold January night, 5½ years ago, a mischievous yearling Trakehner colt named A'Osiris (pronounced Osiris) jumped out of his pasture on Duffy Road and was hit by a car. The damage was all to his left cheek where it appeared that a broken sideview mirror or something similarly sharp must have punctured his face, leaving a fist-sized hole and knocking his teeth out. The first thoughts were that he had been attacked by a wild animal that tore at his face, but a trail of blood out to the road ended in a pool of blood where his teeth lay confirming that he had been hit. He was found standing with his head over the water trough in the morning. It was evident that he had been trying to drink for hours, as there was a thick coating of ice all around the edges of the trough but he couldn't get any water because the huge, gaping wound was preventing the vacuum that would allow suction.

An emergency call was made to the vets at the brand new Vermont Large Animal Hospital. Dr. Steve Angelos arrived quickly, took one horrified look at the injury and Siris was loaded onto a trailer and transported up to the hospital where a team of surgeons spent many hours trying to piece him back together. Fortunately, the extreme frigid temperatures kept the wound from hemorrhaging and the hanging tissue from dying, so there was very little necrosis and most of the tissue was still viable. Siris was meticulously pieced back together in multiple layers of stitches and staples but the road to recovery was a long one. Chewing and eating was a serious challenge for him and he survived on a diet of senior feed and soft second cut hay. His best efforts at chewing and swallowing hay resulted in well masticated wads that were spit back onto the ground. Then the chronic infections started and for months he was kept on antibiotics to combat the respiratory problems that were relentless. Continual use of antibiotics was taking its toll as well and he developed a heart murmur that mercifully was only temporary. Where the tissue was repaired, there remains a raised area on his cheek and the trauma from the injury resulted in some permanent nerve loss and a wave mouth. His teeth need to be filed down regularly to keep sharp edges from forming.

Being the trooper he is, his true character shone through the whole ordeal. During early rehab, instructions were to hand walk him for half an hour daily. When that proved to be life threatening for the person leading him, the hand walking converted to turn out in a round pen. This was successful until the first mare was paraded by him and from a standstill he jumped out of the 5-foot high pen and was in hot pursuit of the fast fleeing mare and owner. That was the end of the round pen. From there he graduated to pasture turnout but it wasn't long before he was putting his jumping talent to the test and effortlessly sailing over three 6 foot fences spaced 20 feet apart to find freedom on the road.

It should be noted that Siris's grandfather is the legendary Abdullah, 1976 individual gold medalist and team silver in grand prix jumping at the Olympics held in LA. And his father is the renowned, imported premium stallion Graditz, sire of 8 approved stallion sons, the record for North America. Several of Graditz's offspring have or are currently competing at Grand Prix level jumping or dressage, so athletic talent comes naturally to Siris.

His owner, Ray Bernier of Valleyview Stable in Milton. was faced with the formidable task of keeping this jumper on the right side of the fence. Ultimately, Siris found himself on the inside of a lush green parcel of pasture surrounded by 6-foot chainlink fencing with 3 rows of electric wire on top to bring the total height of the fence to 10 feet. Finally he stayed in.

As he matured, it became evident that he should be considered for stallion approval. Although only 2% of all Trakehner colts born ever make it to the closed Trakehner studbook as licensed breeding stallions, this boy was too special, in spite of all he had been through, to deny him his chance. Ray made the decision to send Siris for training with Bruce Griffin, reputedly the best handler in North America to be prepared for inspection. Bruce requires a minimum of 3 months to properly prepare the stallion for the rigorous testing, so A'Osiris left Valleyview on April 29 to attend bootcamp at the Griffin Sport Horses facility in Gretna, VA. While in Bruce's care, not only did the cheeky young stallion have to experience the rigors of training, he had to learn to behave himself in the company of other stallions. “He spent some time in juvenile detention learning to be a citizen,” said Bruce with a smile.

Ninety days passed quickly and soon it was time to move Siris up to Carol Poulin Taylor's farm, Esprit Equestrian Center in Durham, ME for the big day. He passed the preliminary veterinary examination complete with 27 digital radiographs and he was ready to mesmerize the panel of 4 judges with his temperament, conformation and athletic ability.

The first phase of the testing was the measurement of height, girth and cannon bone to assure that the stallions met the size requirements. Of 5 stallions being presented that day, Siris was the biggest standing at 16.2 hands with a girth of 195 cm and a 60 cm cannon bone.

Next was the hard surface testing, where the stallions stand in front of the judges and are critically examined for conformation, then walked and trotted away from and towards them. In this phase, the judges are also looking for soundness, straightness and calm temperament.

Presentation on the triangle and at liberty was next. The stallions are walked and trotted in hand around the triangle and then turned loose and asked to trot and canter in both directions. The judges are looking for exceptional movement, grace, fluidity and athleticism here.

Then the jump chute is assembled and the stallions are required to free jump over a line of 3 jumps. The last jump in the chute is raised each time the stallion goes through the shoot successfully, until the judges are satisfied. Siris, who had been on best behavior since the get- go continued to wow the panel with his effortless jumping ability and drew applause from the crowd when he finished his last perfect round.

Finally it was time for his dressage test, the last hurdle before the judges announced their decision. Bruce donned his bowler hat, white breeches, tall boots and jacket and mounted up. As he rode into the ring, his wife Staci said, “This horse is destined for greatness!” The test was ridden flawlessly and Bruce and Siris earned a second round of applause from the spectators.

The dreaded walk was last. The judges huddled in the corner, going over scores, taking last looks at the stallions that were being walked around the arena, waiting with trepidation for the final, irreversible decision. Finally, the speaker for the panel was ready to announce the newly approved stallions, if they found any of them to be worthy. One by one, the stallions would be named and the words, approved or not approved would follow their name. Siris was the first to be announced – “Stallion number 1, A'Osiris, Approved” were the most rewarding words his owner ever heard. “It was a long haul to get here but worth every moment of it,” said Ray. “Without the expert handling and training Bruce and Staci gave him, things might have been different here today.”

Siris is back home, in his pasture at Valleyview for a few months. He will enjoy some well-deserved time off and breed some mares before he heads back to Bruce where he will be prepared for his performance testing, the final phase of the approval. That cold night 5 ½ years ago seems like nothing but a bad dream now.

Picture caption : A'Osiris with his trainer Bruce Griffin in the hard surface phase of the American Trakehner stallion inspection held at Esprit Equestrian Center in Durham, ME on Aug 2.​​ 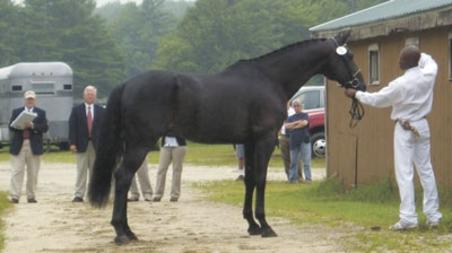 ​Note: A'Osiris was in training with GSH and achieved Approved Trakehner Stallion status at the Trakehner Inspection in Maine on August 2, 2008. We would like to congratulate A'Osiris and his owners Ray Bernier and Zenda Farrell!​​