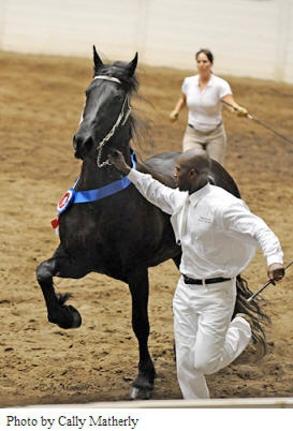 From the President: Handle With Care

The ATA's 35th Anniversary Annual Meeting was a success allowing members not only to participate in the membership meeting but also to see a number of horses performing and/or being presented for inspection. On several occasions, the ATA has published tips on how to properly present a horse in hand. In addition, many members with the powers of observation have watched good handlers and have put those lessons to good use in handling their own horses. Some members unfortunately have not. Good handling can help or hurt the general impression of a horse. Over the years, we have had the good fortune in the ATA to see some very skilled handlers. Carol Wallace from Missouri, Ferdinand and Christian Poll from Germany, Gerard Geling from Germany, Russell Oden from Texas, Bob Orton and Robin Koenig from Virginia and Willy Aarts from California, to name a few of the really good handlers. But I must say, after personally seeing thousands of warmblood horses handled by hundreds of people over the last three decades, I believe that Bruce Griffin from Gretna, VA, is today the best horse handler in the world. He is gifted and has a magical touch with a horse. To me, he is simply poetry with a horse in hand and that is why he was invited to Europe to handle stallions for the huge “Hengstenkeurings” in Holland, the first American to be invited to do so. He personally met Holland’s Queen Beatrix on his first trip and received a token from her. He returns each year to handle stallions. Bruce Griffin grew up in California and, as a youngster, was trained in horsemanship by the late Jeff Wonnell who himself was an important horseman in Arabian circles for more than 50 years. Jeff mentored Bruce for a number of years. Bruce Griffin grew up in a gang-dominated area of Sacramento and avoided perils of the area by focusing on his love of horses. In 2005, Griffin was awarded the JP Perry Memorial Perpetual Trophy for Sportsmanship at Dressage at Devon. Now he and his wife Staci are giving back to kids through their Transition Academy to help youngsters learn responsibilities and life skills by working with horses. Griffin has attended a number of ATA events in the last five years. Those who observed him handle horses could not miss how each horse he handled seemed to instantly trust him and relax once he took the reins. As Bruce asked the horse to walk or trot, he was careful not to hang on its mouth and interfere with its free movement. Griffin has a technique to time his movements with those of the horse as the horse walks and trots in hand. Everything is calm, relaxed and measured. When he asks the horse to stand, the horse not only stands but seems to strike a pose. And, amazing to me, he can do this with a horse that he has never handled more than for about five minutes. To see him handle a horse that he prepped for 120 days is a real treat. What most people might miss in the handling process is the role of Bruce’s wife and assistant, Staci. An accomplished horsewoman and rider since age two, this young lady is also a master in her role. Observers should have noticed how she followed the horse quietly rather than “chasing” it which kept the horse relaxed and allowed it to show its natural gaits. At the walk, she quietly walked in front and about 20 feet to the side with the longeing whip out in front of the horse and parallel to the ground. This signaled to the horse to walk at the same pace Bruce was walking. That subtle “blocking technique” assisted Bruce and allowed him to stay off the horse’s mouth. Staci is just as calm, relaxed and measured as her husband, and her awareness of a horse’s body language is quite apparent. What a perfect team these two make! They are true professionals. “Professional horse handler” is sometimes a rather loose label that many use. Being a professional horse handler, however, is much more than charging someone money to handle a horse. The proof of the pudding is to see knowledge and skill in action….every time. We are one of the lucky associations that Bruce and Staci Griffin support with their work and attendance. The Griffins care about horses – really care – and it shows when they handle ATA members’ horses. Well done folks! Well done! I hope we see the Griffins next year in Jacksonville, FL, at our 36 Annual Convention.  Until then, keep handling ‘em with care.

Letter from the President of theATA